William R. lived in a well-kept ranch style home, nestled on a sprawling piece of land east of Winchester. On a crisp, sunny December morning, I made my first visit to this gentleman, already well known to most of his hospice team. As we approached the front door, greeted by the distinctive squawking of chickens nearby on the property, I mentally reviewed what I had earlier read about the man I would meet inside. Under hospice care for worsening heart failure, Mr. R had been steadily declining in recent days with increasing fatigue and weakness. He had lost the ability to walk short distances and his world had become mostly confined to one room where his trusty dog spent the day laying at the foot of his hospital bed. Despite these changes, one constant had remained: his jigsaw puzzles.

Walking through the house, into his living space, it was impossible not to notice the completed and mounted puzzles proudly hung on the walls. The living room and kitchen were lovingly adorned with 1000-piece puzzles that were completed in record time. William greeted me and the other team members with a smile and we settled into our visit. Soft-spoken with bright eyes, he patiently answered my questions about his breathing, fatigue and appetite. His daughter let us know that although her father was becoming weaker, his passion for puzzle-solving was still alive and well. “Y’know”, she said with a smile, “I knew dad was slowing down when he went from 1,000-piece puzzles to the 500-piece ones”. 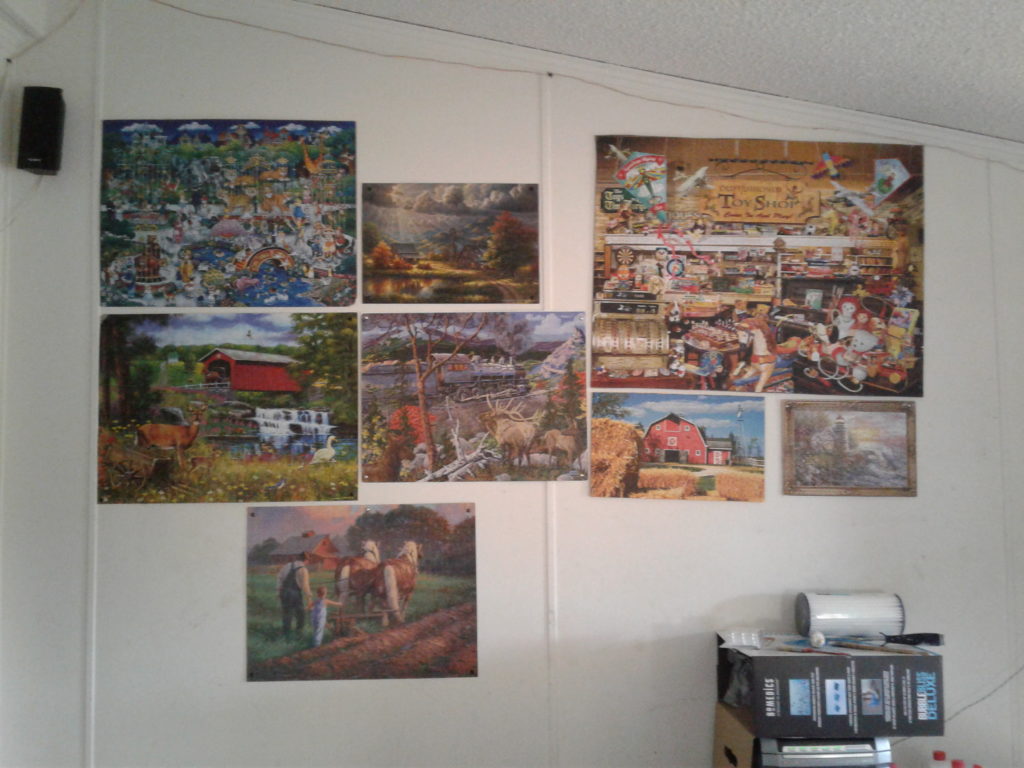 Positioned directly across from the recliner where he sat was his workstation – a desk complete with high powered lamp, magnifying glass, tweezers, hot glue gun and other assorted tools used only by puzzle aficionados. With the business of medical questions over, a smile flashed across his face and he informed us he had Christmas gifts for all.

Next to him on the couch lay a container full of small bags, each with a ribbon tied at the end. He gestured to me and I dutifully and gratefully accepted my present. Inside were two hand-made ornaments, one a candy cane, the other a wreath. Both made from spare puzzle pieces that had found their way into the pile of extras collected over the years. His daughter explained that her dad couldn’t let the pieces go without a purpose and here was the perfect solution.

As I took his hand to thank him, he asked, “Do you like the puzzles on the wall?” I told him I was beyond impressed. “Once I do the edge pieces, that’s it for me”, I cracked. Leaning in, he instructed me to pick any one I liked off the wall and take it. My initial reflex was to thank him but politely decline, knowing our role is to add to our patient’s life, not subtract. But something told me he was giving these precious pieces of joy away as a final act of love, an act that gave him great fulfillment. Indeed, he had been gifting his puzzles to visitors, including other hospice team members, for some time, all to his delight. Realizing this, I nodded and made my way into the next room where my eye caught a landscape scene. It was a puzzle completed to reveal an image of the majestic Grand Teton Mountains of Wyoming, horses in the foreground grazing at dusk. Looking at his son-in-law, I pointed to it and asked “that one ok?”. He smiled and nodded, taking it down off the wall.

It’s now framed and back up on the wall, hanging in my office at Cork Street. Ironically, somewhere along the way, it lost the piece that occupied the bottom right corner. So there it sits, framed, yet technically incomplete. But not to my eye. I see it as a daily reminder that hospice work carries the solemn yet profound duty to help others find some sense of completion as they approach the end of their life’s journey. In a sense, to be that missing piece.
All of us that work at Blue Ridge Hospice, be it in the thrift stores, administrative roles or in clinical work, know we are playing a crucial role in the organization’s mission. We are all a part of a team of people with the singular focus of helping to bring comfort to those facing a terminal diagnosis. Sadly, and far too often, that final piece of one’s healthcare goes missing and individuals go without quality end of life care. This is a trend, however, that is slowly being curbed with increased awareness of palliative care and of the fact that dying well is something that should be afforded to everyone, regardless of social status or ability to pay.

Mr. R’s gift reminds me of that.

Later that evening, after I got home, I read the card that came with my gift bag. “Thanks for being an important PIECE of our life and making everyday a little brighter” it read. Glued inside were two more puzzle pieces along with his signature. He had made sure to get that same gift into the hands of every Blue Ridge Hospice employee who visited him during his final weeks.

My role with Mr. R’s care was not nearly as important as that of the other team members who knew him much better than I. From his home team Nurses, Certified Nursing Aids, and Nurse Practitioner to Music Therapy, Volunteer presence, Chaplain and Social Worker support, my role in comparison was inconsequential. Yet, in reading his words, it still amazes me that I get to be part of a team that does such outstanding and selfless work.

I am grateful to be part of that missing piece. 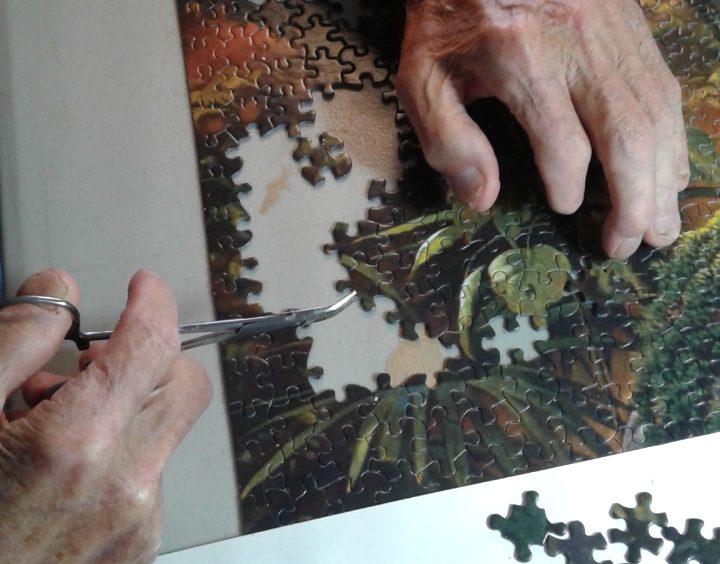